What is Delta T?

Understanding what Delta T is, where its sources can be found, and how it effects Data Centre cooling, can help mitigate cooling and inefficiency problems.

Δ (Delta) is the capital of the fourth letter of the Greek alphabet and is often used as a mathematical symbol defining a “difference” of any changeable quantity.

Delta T (ΔT) is a term used in science that defines the difference in temperature between two measured points. This difference varies either in position or over a period of time.

Understanding where these ΔTs occur within the Data Centre environment can help identify issues and inefficiencies, which once remediated improves operational efficiency, restores a Data Centre to mechanical health and can help reduce operational costs.

Recently, Upsite Technologies published two blog articles by their Senior Engineer Lars Strong, a thought leader and recognised expert on Data Centre cooling optimisation. In this article we summarise these two blogs to highlight why interpreting this metric is vital in understanding how ΔT effects Data Centre cooling.

In Upsite’s first blog “The More Commonly Know Delta Ts in Data Centre Cooling” it highlighted that there are in fact four ΔTs which should be considered and that contribute to the health of the Data Centre. Two of these more common ΔTs are often discussed within the Data Centre industry as a single metric – “The ΔT” and depending on who is discussing it, it could be affecting two totally independent factors which should really be considered and monitored separately. ΔT is commonly considered to be the rise in temperature of the air as it passes through IT equipment, where it picks up heat produced by that equipment and removes it and the difference in temperature across the cooling equipment’s cooling coils, or the difference between supply and return air temperatures.

Monitoring these metrics separately gives a much better understanding of the health of a Data Centre’s cooling. 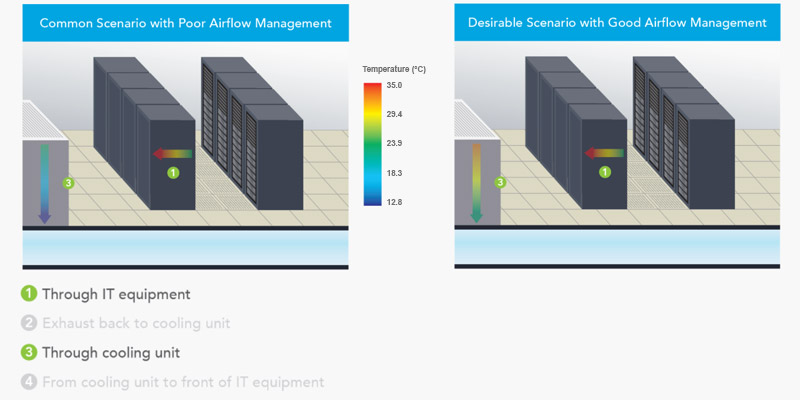 When considered as a single metric, ΔT is often based on the temperature drop across the cooling equipment or the temperature rise across the IT equipment. However, there can be several reasons why these values can be different, but will generally fall into two categories: The return air to the cooling units is being cooled by bypass airflow (air failing to go through equipment) or is being warmed because of hot air re-circulation. The original blog then looks at the science needed to calculate the relationship between airflow, temperature differential and heat which can vary based on altitude and units of measurement (°F / °C – CFM, LPS or CMH).

In actual applications the ΔT across IT equipment typically ranges from around 20°F (11.1°C) up to around 35°F (19.4°C) depending on the type of equipment.

Through Cooling Units, the ΔT is the drop in temperature across the cooling coils, or across whatever is removing the heat from the Data Centre air. Ideally, the delta should be the same as the delta across the IT equipment, meaning that the cooling resource is perfectly matched to the heat load being served. However, this is rarely the case.

The ΔT across the coiling source is also affected by set points. For example, if there is a lot of bypass airflow it is possible that the return air can actually be below the set point and therefore returned into the Data Centre without any heat being removed. 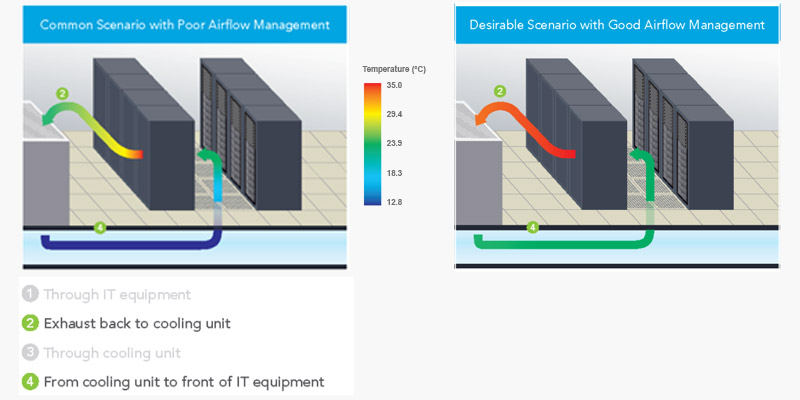 From Cooling Unit to Front of IT Equipment

It is surprising that this ΔT is overlooked. If you have air being supplied at 55°F (12.7°C), which is often typical, that is over 5°F (2.8°C) below the recommended minimum temperature for data processing equipment as per ASHRAE environmental guidelines. This low temperature isn’t an issue as usually by the time it reaches the IT equipment it is typically going to be in the 70°s F (20°s C), or possibly even higher. Why is this? Sometimes supply air can warm up before it enters the room from the plenum, through floor grilles positioned too close to the CRAHs. The Venturi effect that this can cause draws warm air into the plenum and mixes with the supply air. Also, underfloor obstacles can create vortices which result in low pressure pockets that can pull air from out of the room and into the underfloor plenum, again resulting in mixing with the supply air and raising its temperature. Even when it enters the room the temperature can increase via the effects of hot exhaust air circulating back to the front of racks and escaping through unsealed gaps within or surrounding the mounting area. These temperatures can increase higher up the rack resulting in hotspots. Hot exhaust air can also wrap over the top, or around the sides of server racks again increasing the supply temperature. The end result from these increases in supply temperature across the vertical plane of the front of the server rack is that the server rack inlet to outlet ΔT can be significantly higher than the equipment ΔT.

Exhaust Back to Cooling Unit

Conversely, in a lot of Data Centres the ΔT from the servers back to the cooling source is negative; this means that the return air temperature tends to decrease from when it is exhausted from the IT equipment to when it reaches the cooling units to be re-cooled. This drop in temperature results from excessive cooling air that is bypassing the heat load and returning to the cooling units, reducing the temperature of the return air along the way. Causes of bypass airflow can result from poorly positioned airflow grilles, unsealed cable / pipework openings in the raised floor, differentials of underfloor pressures resulting in high pressure zones.

In most cases, the optimum efficiency within the Data Centre will occur when there is minimal difference between the supply air temperature and server inlet temperature, minimal difference between the IT equipment ΔT and the cooling coil ΔT, and the supply temperature as a result can be increased to a temperature approximating the maximum specified upper threshold of the space. Monitoring all four of these ΔTs provides valuable assistance in fine tuning the Data Centre to meet its optimal performance level. Any server inlet temperature that is more than 5°F (2.8°C) higher than the supply temperature being produced by the cooling units indicates that there is some form of hot air re-circulation or an inadequate flow zone. The use of CFD analysis can help identify the source of pressure variations under the floor. If the return air intake of the cooling units is more than 5°F (2.8°C) lower than the exhaust temperature from the IT equipment then there is a bypass airflow problem.

These 5°F (2.8°C) guidelines for calibrating ΔT are merely suggestions to help move a Data Centre into the top 20% of efficiently and effectively performing Data Centres.

Page load link
This website uses cookies to improve your experience. We'll assume you're OK with this, but you can opt-out if you wish Accept Read More
Manage consent

This website uses cookies to improve your experience while you navigate through the website. Out of these, the cookies that are categorized as necessary are stored on your browser as they are essential for the working of basic functionalities of the website. We also use third-party cookies that help us analyze and understand how you use this website. These cookies will be stored in your browser only with your consent. You also have the option to opt-out of these cookies. But opting out of some of these cookies may affect your browsing experience.
Necessary Always Enabled
Necessary cookies are absolutely essential for the website to function properly. This category only includes cookies that ensures basic functionalities and security features of the website. These cookies do not store any personal information.
Non-necessary
Any cookies that may not be particularly necessary for the website to function and is used specifically to collect user personal data via analytics, ads, other embedded contents are termed as non-necessary cookies. It is mandatory to procure user consent prior to running these cookies on your website.
SAVE & ACCEPT
0
0
Your Basket
Your basket is emptyReturn to Shop
Continue Shopping
Go to Top